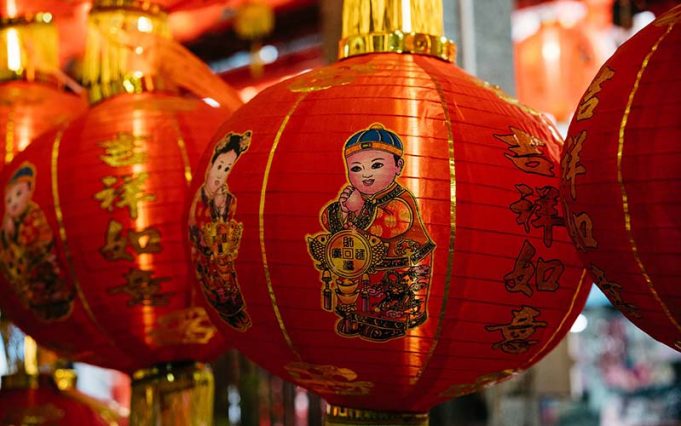 Thailand never ceases to amaze its thousands of visitors with vibrant festivals which are sure to amuse them via offering glimpses to the country’s heritage and traditions. Each month brings a new opportunity to participate in these festivals. Locals of all ages, from children to adults and the elderly, have the best time of the life during these celebrations. These Thailand festivals are the most popular ones to attend and are regarded as one of the best ways to enjoy a unforgettable time in what already is known as a highly incredible country.

Thailand is a popular tourist destination for a variety of reasons, including its scenic beauty, water sports, beaches, food, & temples. If you are interested in culture, you should attend one of Thailand’s many festivals. Take a look at a few of the best Thai festivals that you can attend on your upcoming trip to this gorgeous beach paradise.

This is one of Thailand’s most interesting traditional festivals, also known as Ghost Festival. It is a festival that mergers religious traditions, a good time, and local handicrafts. For three days, thousands of locals dress up in colourful, ghastly masks having stretched faces & phallic noses painted in bright, gaudy colours. The origins of the Ghost Festival are a mix of Buddhist & animist beliefs. The main parade is usually held on Friday, followed by music shows & pageants on Saturday, and Buddhist ceremonies on Sunday. If you want to experience the atmosphere of religious festivals within Thailand, consider attending this one. 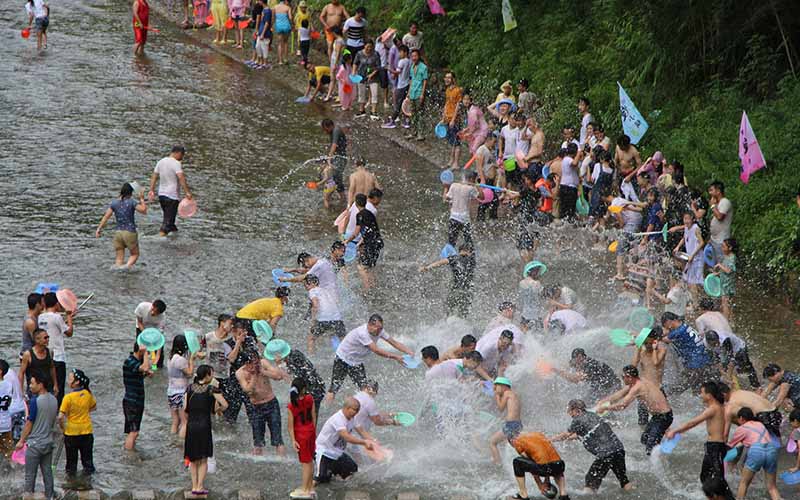 The Water Festival Thailand, also known as Songkran Festival, is one of the maximum fun festivals within the country, if not the world! This long and large festival includes a three-day water fight where people from all over the country participate. People use buckets, water guns, hose pipes, and anything else they can get their hands on to splash water on others while drinking, listening to music, dancing, and being drenched from head to toe. Isn’t it exciting?

With Chinese New Year, Yaowaraj – Bangkok’s official Chinatown – hosts one of the most exciting Thailand celebrations. The narrow, bustling alleys of this neighbourhood are always an exciting and fun place to explore. Dragon and lion dancers, iconic red Chinese lanterns, exploding firecrackers, and crowds of worshippers and locals who gather for participating in the fanfare & enjoy delicious Chinese banquets fill every nook and cranny of the street and surrounding alleys. If you are in Bangkok during the Chinese New Year, go straight to Wat Mangkon Kamalawat located on Charoen Krung Street on the northern edge of Chinatown. It is without a doubt is an extremely joyful Thai festival. 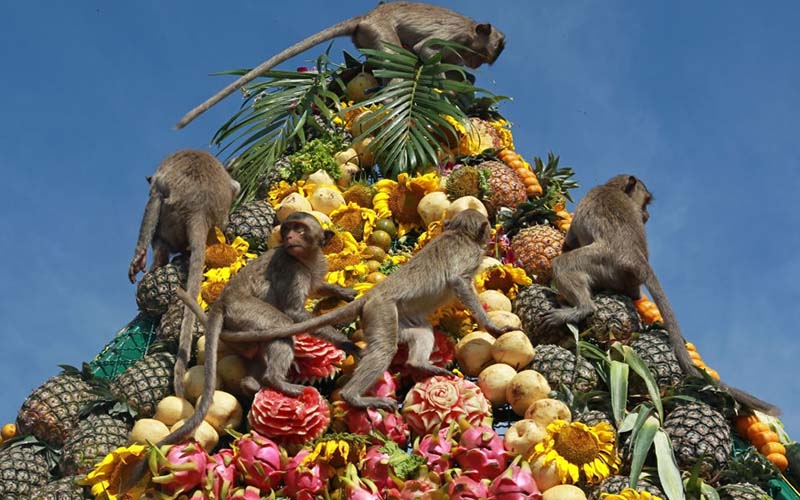 This is a food festival in Thailand unlike any other. It takes place in Lopburi, which is 150 kilometres north of Bangkok. It is famous for its many monkeys, and feeding the simians is a highly popular activity for tourists who visit Lopburi. However, come November, the simple treats they receive from visitors get replaced by something much grander. A massive banquet is set up for the approximately 3,000 monkeys who live in this area of Thailand, offering them a day solely to feast on about 4 tonnes of vegetables, fruits, and a variety of other treats. This is amid Thailand’s most intriguing festivals.

This is a well-known festival in Thailand that is important for the farming communities of the Issan that is situated in the country’s north-eastern region. Entire villages attend this festival because it is considered the last big ‘knees up’ before the planting season begins. The rockets are launched for encouraging the Gods to rain heavily. On the initial day of the Boon Bang Fai, elaborate rockets are built and paraded around before being launched high in the air all through the weekend. Every Rocket Festival in Thailand 2022 is accompanied by live folk music, beauty pageants, the consumption of the local rice wine, & a party that is full of fun & frolic. 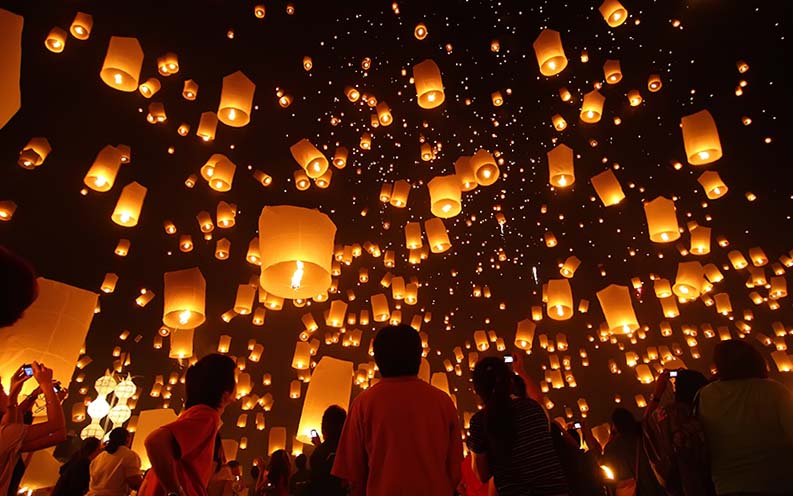 If you want to experience even more outstanding Thailand festivals & celebrations, plan your trip around the Yi Peng (Lantern Festival). Like those in China and Vietnam, the lantern festival is one of the most incredible sights one will ever see. People gather along the Peng River’s banks to release innumerable paper lanterns in the sky, where they float away in the gentle evening breeze. Although it is more like a tradition over a festival, this is a fantastic photo opportunity for capturing some lovely memories. Religious ceremonies, parades, firework displays, and the release of paper boats into the river are also possible. Participate in the festival if you wish to learn more about the culture of this country. Among all Thai festivals, it is without a doubt one of the most vibrant.

Also Read: The Floating Festival of Dreams in Thailand 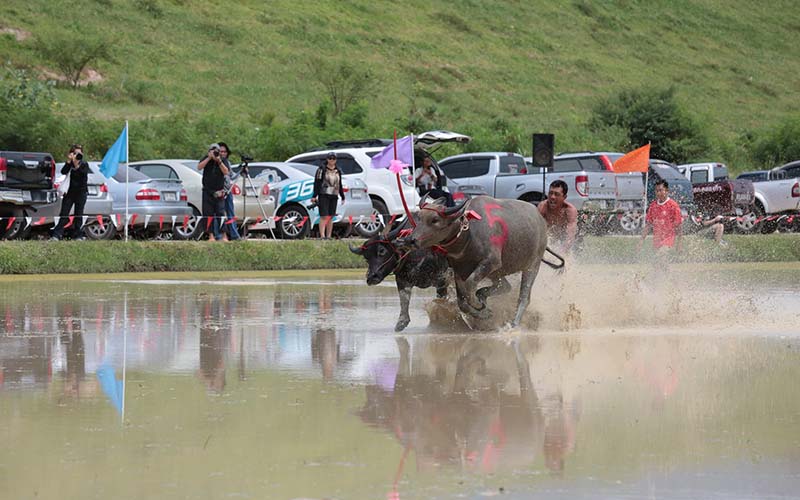 Wing Kwai, one of Thailand’s best festivals in 2022, is a buffalo racing festival. Thailand has had a buffalo racing tradition for over a century. The race track is 100 metres long and located in front of the Chonburi City Hall. Aside from buffalo racing, this festival also features a buffalo beauty pageant, buffalo decorations, and other activities. Following these, you can participate in other fete games accessible at the festival. 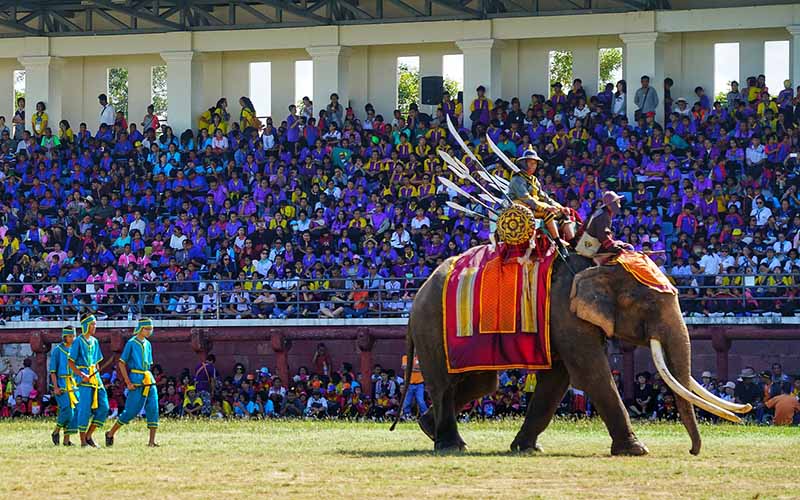 This festival honours Thailand’s colossal animals, as the name implies. Elephants were historically considered an important part of Thailand’s battle, agricultural procedures, and travel. Furthermore, Lord Ganesha is apparently worshipped in this country for the same reason. This festival, held in Thailand’s northeastern region, allows you to witness a royal parade of elephants which are lavishly fed vegetables and fruits. This is one of the Thailand festivals which tourists must attend because it reflects the country’s cultural and historical significance. 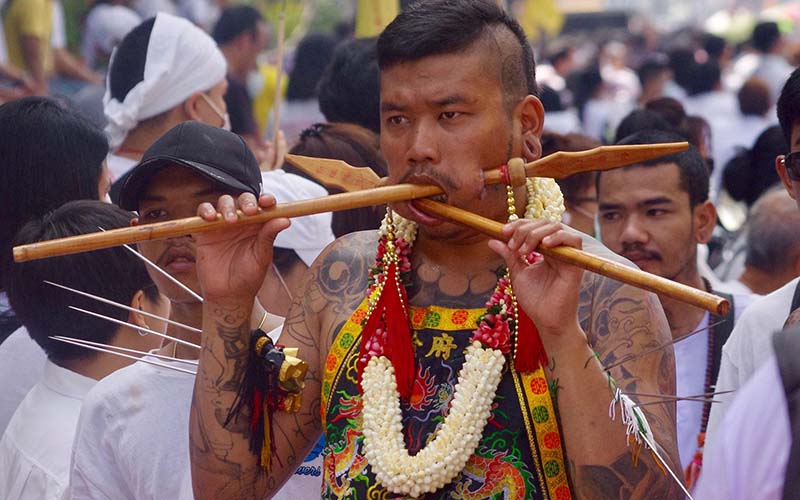 This is one of Thailand’s most important festivals, and for a month prior to it, people refrain from eating meat, garlic, onions, and other foods. This is followed via a magnificent celebration in October, when people participate in gruesome activities such as laying on knives and piercing their faces. This festival will also feature spectacular fireworks and dance!

Because the people of this country never miss an opportunity in showing their devotion to monarchs, they commemorate their birthdays with zeal. The birthdays of the Queen and King are celebrated as Mother’s Day and Father’s Day, respectively. The queen’s birthday is nicely celebrated on August 12th, while the king’s birthday is celebrated on December 5th. Both days are considered national holidays & are important Thailand festivals.

Do you want to see more Thailand celebrations and festivals? Mekong Naga Fireballs greets and draws visitors from all over the world. The festival takes place on the banks of the Mekong River, and during the night, one can see reddish light balls that rise into the sky with no sound. These fireballs, which can reach 600 feet in height, rise naturally and without human intervention. It’s a magical sight to behold. It is yet not known whether it is a scientific occurrence or some sort of magic. 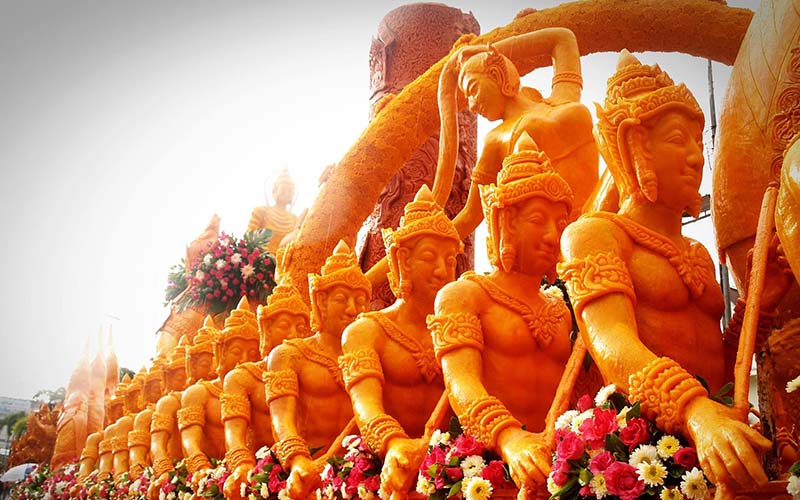 This festival is famous in the southeastern region of Thailand and is celebrated in the Asanha Puja & Khao Pansa days, which commemorate the first sermon by Buddha and the beginning of Buddhist Lent, respectively. People attend this festival to see the magnificently and intricately created large wax sculptures which are displayed at the time of a parade. This parade is complemented by music and dance. If you desire to be a part of one of Thailand’s best Buddhist festivals, come during the month of the festival. 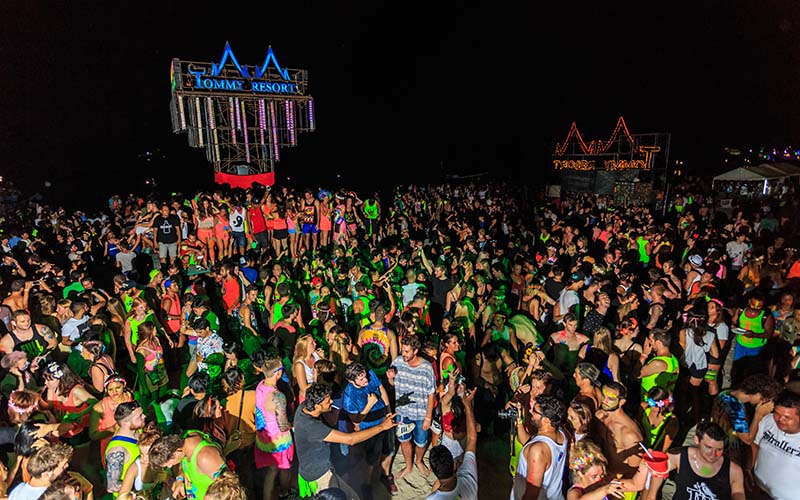 Full Moon parties in fact are the world’s largest beach parties. Every month, 30,000 or above people gather on the beach to dance, play with fire, and have a good time. The energy is insane. To believe it, one must first experience it. The full moon parties, which are mostly attended via tourists, have grown in popularity. The area is mostly crowded with people celebrating each phase of the moon. Participate in one of these fantastic Thailand festivals in 2022 and have the time of your life.

The Pattaya Wonderfruit Festival is a three-day music & art festival. It is typically held in December on Pattaya’s outskirts. The main attraction of the festival, with a superb mix of Thai, Asian, and Western cultures, is obviously the music created via international designers. Food is also a vital facet of the festival, with famous chefs creating signature cocktails & meals. Among Thai festivals, it is unquestionably amid the finest music festivals.

This electronic music festival, with past lineups including heavyweights such as Dash Berlin, is for all Thai EDM festival fans. They have previously hosted editions with well-known international music titans in Pattaya & Bangkok. Keep an eye on this year’s date to be a part of the grand Thailand festivals in 2022.

So, which Thai festivals do you desire to attend? Whatever you choose, make sure to plan your trip to Thailand around few of the best festivals that will make your trip more interesting than you could have imagined.

Also Check: Guide a Thai Culture Through Its Unique Festivals 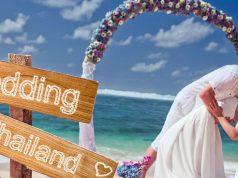 Events & Celebrations
10 Reasons to Choose Thailand for your Destination Wedding 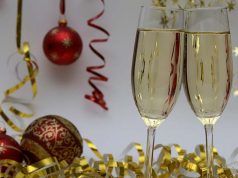 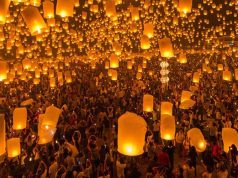 15 Spectacular Festivals in Thailand 2022 That Are All About Love,...
Events & Celebrations

10 Reasons to Choose Thailand for your Destination Wedding
Events & Celebrations